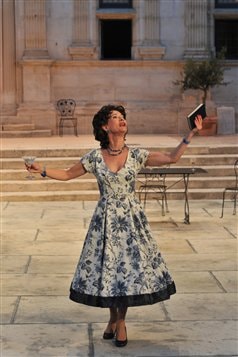 Is it because he comes from Montreal that Denis Marleau chose to transpose Les femmes savantes in the Fifties, at a time when the women's roles were so repressive and constrictive in the nearby United States? In 1949 Simonne de Beauvoir published Le deuxième sexe; all in all the situation in France was not much better. Men in Molière's comedy are not of a type that would tempt the women enough not to transform their erotic energy into intellectual pursuits. The surroundings of the Chateau de Grignan are full of traces and memories of other famous women's sublimation. Madame de Sevigné was burried in the chapel of the castle near the altar. No wonder she approves of the choice of the play. The costumes from Ginette Noiseux mixing the style of the 50's with fabrics reminding an 18th century indienne underline the fact that the status of women is a timeless issue.
Not far away from Grignan, in the village of Sainte Cécile des Vignes we were happy enough to meet a young winegrower and winemaker who works his 3 ha vineland, the size of a  pocket handkerchief with a vintage tractor from the 70's. His wine has as strong a personality as his labels whose names come from his love for hard rock. 1962 is the year his own electric guitar was mnufactured, Pinky Terror is the name of his rosé and Back in Black the name of an AC/DC's hit. He has a very small production with a swinging character, something really different you don't taste everyday. Organic wine with hardly any sulfites. To drink on the spot.