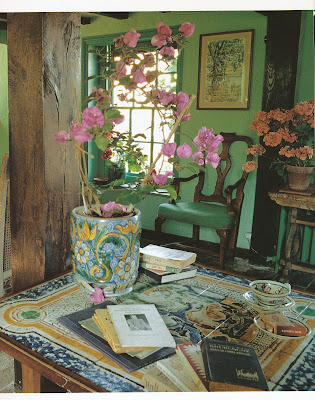 Virginia Woolf seems to have been rather of two-minds about literary pilgrimages. She warned us against them. "A writer's country is a territory within his own brain; and we run the risk of desillusionment if we try to turn such phantom cities into tangible brick and mortar." Nethertheless she  confessed that she herself had performed such journeys "dozens of times." She visited Keats' and Carlyle's house, wrote an essay on the Brontës and Haworth parsonage and confessed how she could not refrain from trying to conjure up the figure of Doctor Johnson while visiting Dough Square. Her vision of place gives her a sense of connection to the ghostly presence of the human spirits. She liked to choose a darkish day for her visits "lest the ghosts of the dead should discover us." For her, the place completes the self, it is crucial to the activity of the imagination and to the sense of fusing with things. Mrs Dalloway's epiphany gives an idea of Virginia Woolf's transcendental belief.

“Clarissa had a theory in those days - they had heaps of theories, always theories, as young people have. It was to explain the feeling they had of dissatisfaction; not knowing people; not being known. For how could they know each other? You met every day; then not for six months, or years. It was unsatisfactory, they agreed, how little one knew people. But she said, sitting on the bus going up Shaftesbury Avenue, she felt herself everywhere; not 'here, here, here'; and she tapped the back of the seat; but everywhere. She waved her hand, going up Shaftesbury Avenue. She was all that. So that to know her, or any one, one must seek out the people who completed them; even the places. Odd affinities she had with people she had never spoke to, some women in the street, some man behind a counter - even trees, or barns. It ended in a transcendental theory which, with her horror of death, allowed her to believe, or say that she believed (for all her scepticism), that since our apparitions, the part of us which appears, are so momentary compared with the other, the unseen part of us, which spreads wide, the unseen might survive, be recovered somehow attached to this person or that, or even haunting certain places, after death. Perhaps - perhaps.”
Mrs Dalloway, 135

How strange that the water element be ever so present in Monk's House; the rain comes in under the back door 'when it rained heavily the water would stream across the kitchen and disappear through a crack under the sink'-just as it did on the first night of the couple's installation in Rodmell. The original Thirties shade of apple green that Virginia Woolf loved so much, reverberating the plants curling around the windows and casting moving shadows on the walls gives an uncanny sensation of being in an underwater cave.* Virginia Woolf drowned herself in the nearby river Ouse where she used to wander.

*Caroline Arber's photographs infused with vibrant green light
capture the atmosphere of the house with emotion.
The World of Interiors, June 2012.

Katherine C. Hill-Miller,
From The Lighthouse To Monk's House:
A Guide to Virginia Woolf's Literary Landscapes, 2003.


To visit the place: