Broadway Market is located in East-End London, in the Borough of Hackney. Barrow boys have been welcoming shoppers to Broadway market since the 1890s. It is one of London's oldest market located on the ancient drover's road from Essex to the slaughterhouses of Smithfield. This busy food  market dwindled over time until it was limited to a couple of stalls in the early 2000s.  It has been revived on 8 May 2004 when a  food market was launched on Saturdays.  The ongoing development of the area has sparkled a debate about the perceived gentrifiction of Hackney, the greed of some 2012 Olympics game developers and the dubious way a couple of ancient tenants of shops have been evicted from their small premises like Tony Francesca or Spirit.
"Regeneration sounds like one of those unproblematically good ideas. It is a term you hear a lot from government ministers. One imagines love and attention being poured into a neglected place. But, as Patrick, one of the people who took over Francesca's, puts it, "when local people hear the word, they feel afraid. They feel attacked." The arrival of money into an area always leaves winners and losers, but the more I discover about what has really been happening here, the more I have come to feel angry about the callous way in which the process is being handled. Is this regeneration or degeneration?"
Some people are pessismistic and wonder if landlords will eventually drive the independents out and replace them with franchises.
To know more about the issue, you might be interested by Hari Kunzru's article in The Guardian. I could not find any more recent article on what happened to Tony Francesca's café but I understand from what I read in The voluptuous manifesto that it just disappeared. I would be interested to learn more about it. I am going to investigate further and let you know if I can find something. May be you know better about it?
The photographs of old markets of London come from a very special blog - which is much more than a blog and has also become a book.  Spitalfields life is signed by the genteel author who tramp the streets of East-end London in search of simple daily life treasures. I have just begun ramaging through it and I cannot but strongly recommend it to you. Next time I will tell you more about Mr Pickleman (photo 4). 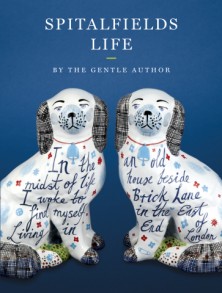