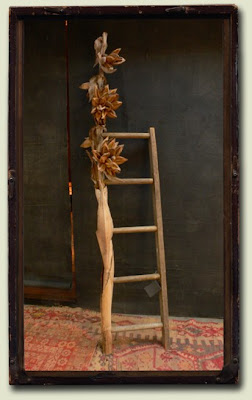 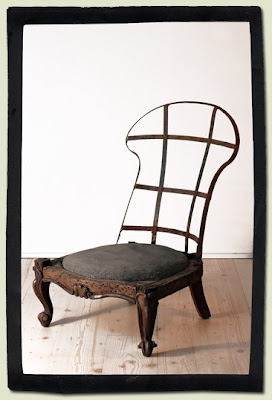 1 Triffid Ladder, an antique dried flower replaces the leg of a neglected old wooden ladder.
2&9 For Richer for Poorer from the Concrete Stitches series - broken and abandoned furniture is rendered functional again by casting concrete in, on, and around the pieces.
3&4 From this day forward, Movable interior, April 2010, Milan
5&6 The duo's interior in World of interiors, July 2010
7 Portrait of James Russell and Anna Plumb by Andrew Meredith Photographer for Elle decor Italia

JAMESPLUMB is a design duo of British designers headed by two artists under one name, James Russell and Anna Plumb. The designers salvage forgotten treasures and lovingly restore them, giving them a new life and a new function. Curiously, the ethos of the duo is inscribed at the heart of their made up name, created from a hybridation of their two names. They use the same fusion process in their creations, celebrating the union of two seperate objects, eventually becoming one. The symbolism of marriage narratives is suggested in the name of their Concrete Stitches collection, 'For Better or Worse', 'Richer the Poorer', 'Until Death Do us Part'. The duo is a couple in life. Do they reassert their pledge of mutual support and love by inventing new narratives together, fighting against the erosion of time and menace of decay?
The overlooked, discarded and time-worn find  a new identity and  a new story under their hands. New tales that might have gone untold reveal the  victory of love and hope over death.

They had their first international exhibition From This Day Forward curated by Diana Marrone for the Fuorisalone during Milan Design Week 2010.