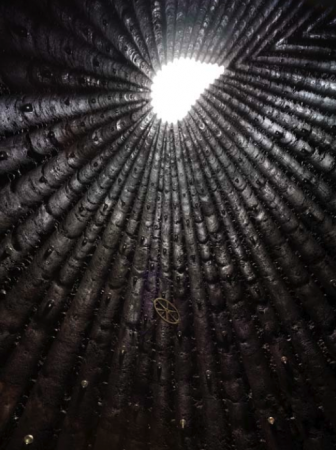 Swiss architect Peter Zumthor received the Pritzker Architecture Prize  in 2009. For 30 years, he has been based in the remote village of Haldenstein in the Swiss mountains, removed from the flurry of activity of the international architectural scene.  The field chapel dedicated to Swiss Saint Nicholas of Flüe, known as brother Klaus is located on a farm in the town of Wachenhorf in Merchernick  near Cologne. The chapel commissioned by a couple of farmers was largely constructed by them with the help of friends and acquaintances. It carries on the tradition of chapels built on private lands. The interior of the chapel room was formed out of 112 tree trunks configured as a tent. The exteriors is "rammed concrete" -layers of concrete were poured over the wood structure for 24 days. Once the concrete was set, a fire was kept  burning for three weeks inside  to remove the tree trunks structure, leaving the concrete shell. A portion of the ceiling is open to the sky and small pinholes are cut in the concrete  to let light inside. "His buildings have a commanding presence, yet they prove the power of judicious intervention, showing us again and again that modesty in approach and boldness in overall result are not mutually exclusive. Humility resides alongside strength. While some have called his architecture quiet, his buildings masterfully assert their presence, engaging many of our senses, not just our sight but also our senses of touch, hearing and smell." Citation of the Pritker Prize jury. 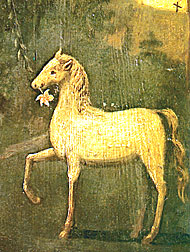