The Sublime in Contemporary Art. Hiroshi Sugimoto's Views of the Invisible

"Every time I view the sea, I feel a calming sense of security,
as if visiting my ancestral home; I embark on a voyage of seeing."

When I saw these huge gelatin silver prints of Sugimoto's seascapes series for the first time last year at the Collection Lambert during the exhibition Le temps retrouvé I felt literally drawn into Sugimoto's image, lost into a sea of meditation. Since then I read and thought much about his work. I grew really enthusiastic when I learnt that he began working in 1980 on an ongoing series of photographs of the sea and its horizon, Seascapes, in locations all over the world. The black-and-white pictures are all exactly the same size, bifurcated exactly in half by the horizon line. How can he drive the viewer to want always to look closer at his seas of "time exposed"?  His use of an 8×10 large-format camera and extremely long exposures  up to three hours enables him to explore both physical and spiritual boundary as well as  the phenomenology of the picture plane.
While deeply metaphysical and existential these photographs are a meditation on photography itself. 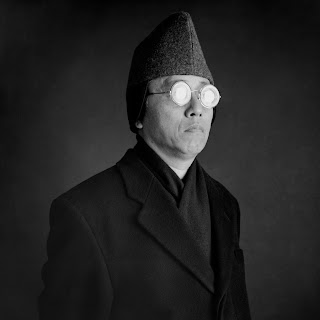